All rules are thrown out the window and an improvisational circus explodes before your eyes.

I’ve heard people say, “Find a job doing something that you love and you’ll never work a day in your life!” That quote became a reality for me. I feel fortunate and grateful to be able to make a living through music and Lakewood Guitars has been there from the start.

I’ve been playing Lakewood Guitars since the early 1990’s. What intrigued me the most about the instruments is that Martin Seeliger and the Lakewood Team were willing to try custom ideas, when building instruments, that other manufactures refused to do. It’s his attention to detail and listening to the artists’ needs that reflects, not only in the look and feel of his guitars, but also in their superior performance. Night after night, my M-22 and J-32 Custom have delivered flawless sound. 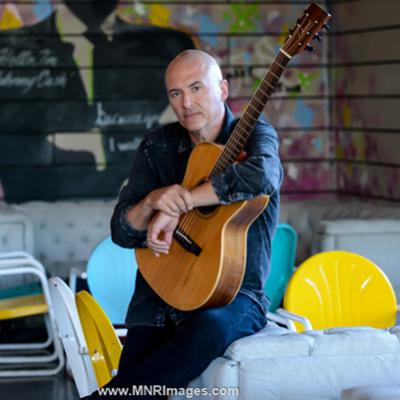 When Bill Dutcher picks up an acoustic guitar, the music that fills the room cannot be branded with a simple sentence. When you see him play live you’re experiencing an event that shatters the pre-conceived notion of what a solo acoustic artist is capable of. You’re witnessing the fusion of six strings, ten fingers, unorthodox tunings and various electronics blend a unique cocktail of rock, blues, classical, middle-eastern and Celtic flavors into an acoustic symphony. When he walks on stage, all rules are thrown out the window and an improvisational circus explodes before your eyes. Every part of the guitar is fair game as he makes it growl, whine and sing to the pounding percussive pops, slaps and pings that emanate from the acoustic guitar.

Born and raised in Dublin, Ohio, USA, He played electric lead guitar before making the journey towards performing as a solo artist.  At the same time he was able to establish relationships as an endorsee with major music manufactures L.R. Baggs Electronics in California and Lakewood Guitars from Germany.

His vocal ability reaches deep down towards the baritone styling’s of Johnny Cash and soars up to the ethereal echoes of Robert Plant of Led Zeppelin.  His original lyrics speak of personal experiences that make his songs read like stories from the heart. When performing live, Bill’s intensity shines through as he visually assaults the strings and sonically leaves listeners perplexed. Exotic tunings, two-handed tapping and percussive techniques, along with his ability to keep listeners captivated, has won over audiences nationwide. Bill’s commitment to music along with his stage experience offers a unique entertainment presentation.

Regular listener’s constantly remark about how no two shows are the same. “I love to push the envelope every night, trying to draw in all that is around me and channel that energy through my heart and hands to the audiences’ ears,” Dutcher comments.  He has a sixth sense for the art of reading audiences and playing to the dynamic of a venue. Every show sends listeners away saying, “How can one guy with one guitar do this?”